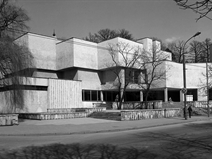 The Kaunas Picture Gallery, opened in 1979 to house the artworks of famous Lithuanian collector Mykolas Žilinskas, is a striking example of architecture of the period, combining elements of Brutalism and sleek International Style modernism.

The design of the gallery emphasises the built form as sculpture; elevated and distinguished from the street by a stepped plinth, which serves as a podium presenting the modelled architecture, just as artworks are exhibited within the building. The sculptural quality of the massed cuboid volumes is further enhanced by the scarcity of windows on the upper floors, displaying a smooth concrete surface which stresses form over decorative elements. Such a dramatic lack of windows, and attendance to massive sculptural blocking, is reminiscent of parts of Claude Paillard’s Theater St Gallen, built in the 60s. Use of glass, and permeable elements is restricted to the the first floor. Here, the large curtains windows and open terrace produce an interruption in the overall sculptural solidity of the gallery building. This serves to definitively accent the composition above, and create a diagonal line symmetry between the stepped forms of the plinth, and those of the building above. The composition itself utilises a strict geometric scheme, made up of cuboid volumes held together in a dynamic arrangement (even the piloti are square-forms). Generally a horizontal composition, which welcomes a panoramic view, this is broken by the light-handed gesture of chimney-like vertical forms that rise above the entrance, and provide a signpost of this in what is generally a highly non hierarchical arrangement. The entrance to the museum today is further highlighted by Jadvyga Mozuritė-Klemkienė’s sculpture Creator, made in 1987, and in 2007, one of the gallery’s corner walls was decorated by a work of the Brazilian street artist team Os Gemeos.

While much of the scheme of this building accentuates its architectural exceptionality, the Kaunas Picture Gallery is also artfully integrated into its site on the curve of K. Donelaičio street and backing onto the slope of Žaliakalnis. The irregularly stepped plinth that leads to the entrance of the gallery integrates this approach into the hill behind. Steps ascending this plinth from different angles off the street create an open transition from the pavement, attentive to the corner that the building sits upon. This corner itself finds itself represented in the composition of the structure; the two offset levels of repeated stepping on the left hand side of the gallery may be read as a formalisation of this corner. Finally, the terrace space created by the overhang on the right-hand side of the gallery, and held in by the square piloti, softens the divide between environment and walled interior in this building, through a semi-contained, transitional space.

Decoration in this building is mainly restricted to the interior, and delicate, or hidden gestures on the outside surfaces. Diagonal stone striations in the surfaces of the plinth texturally distinguish it from the building proper (and perhaps blend it with the “natural”hill behind). Elsewhere, the roof of the terrace is clad with geometric relief tiles, and a band of dark stone wraps around the corner at street level. A slight lip at the roofline, and windows, further draws out the sculptural form of this building.

The interior decoration of the gallery employs a range of materials fashionable in the period: dolomite, light granite stucco, and dark granite slabs. The interior of the gallery is arranged around the main staircase. On the first floor stands the main hall- used for temporary exhibitions-, a lobby, hallway and cafe. The second and third floors are made up of exhibition space, as well as an auditorium for special events. Formerly, an artist’s studio was housed here. Up to the day, the lobby’s authentic interior has been preserved, decorated with original furniture, light fixtures, and wooden finish. 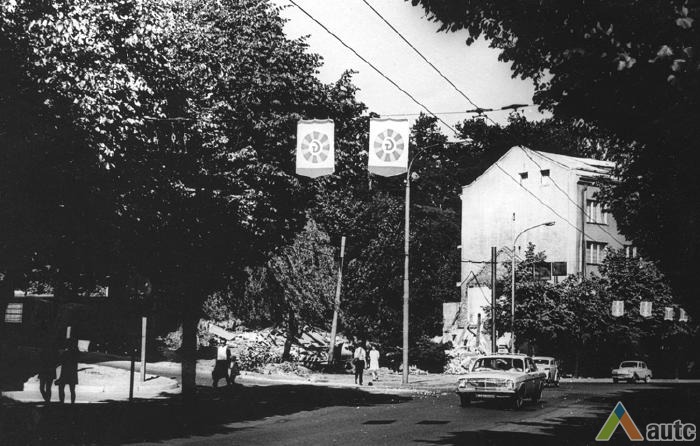 Site of the Gallery in July, 1976. Image from the personal collection of A. Dumbliausko. 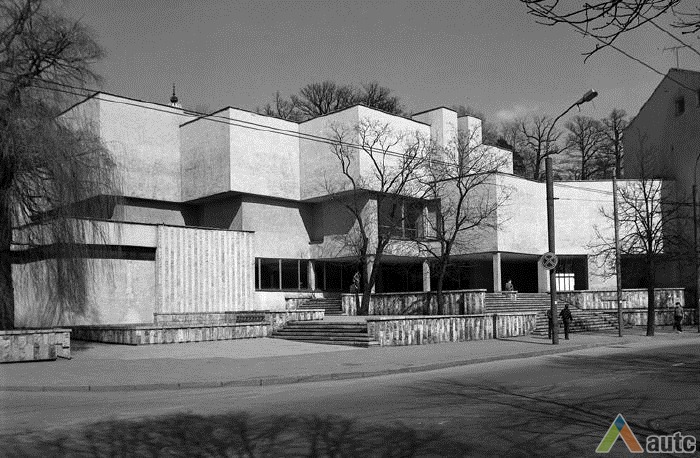 Gallery in 1985. Image from the personal collection of R. Požerskio. 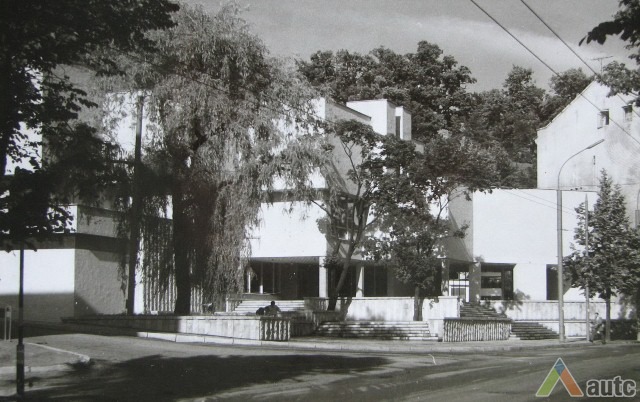 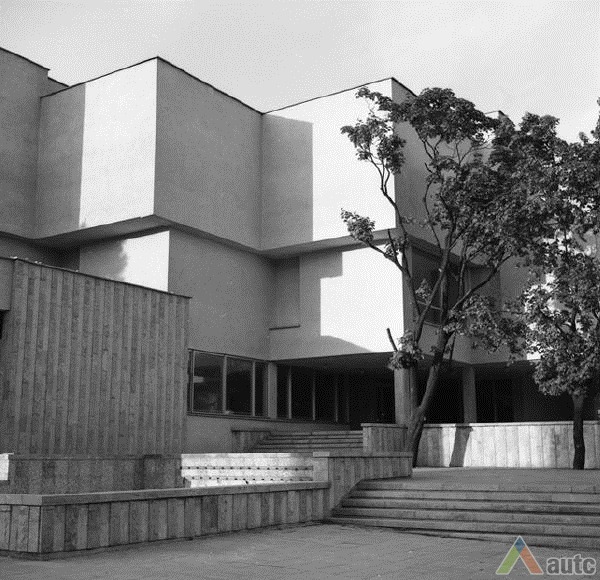 Part of the Gallery in the Soviet Period. Image from KT ASI archive. 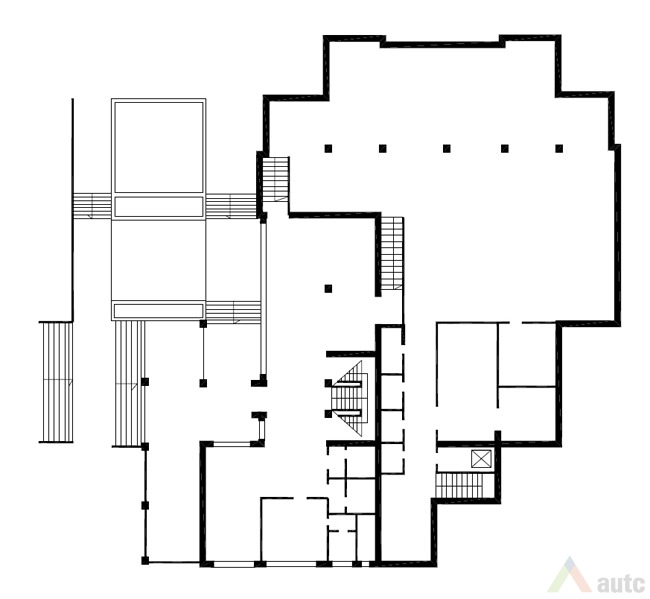 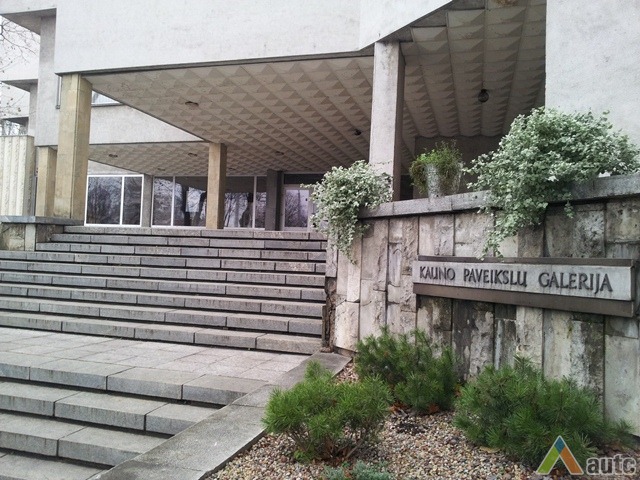 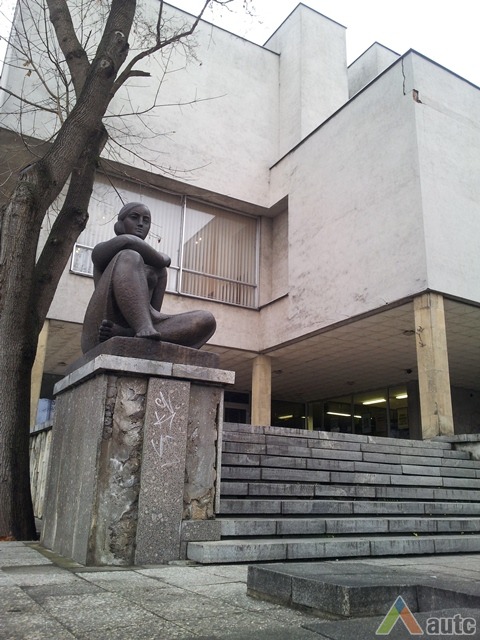 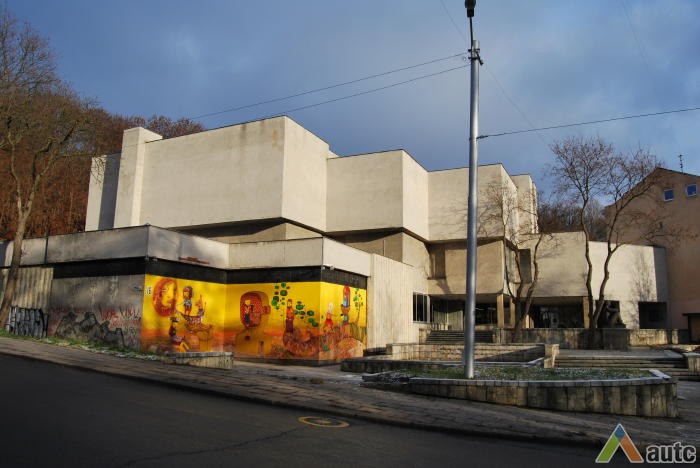 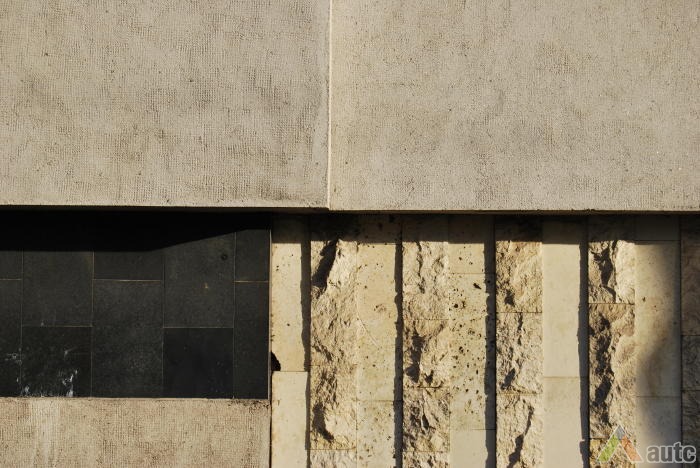 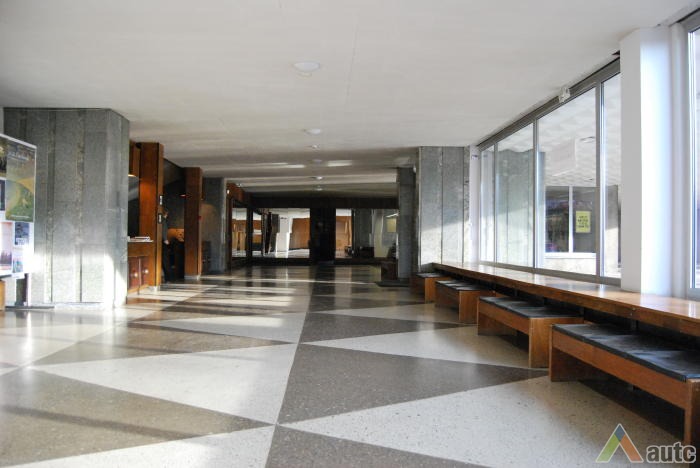 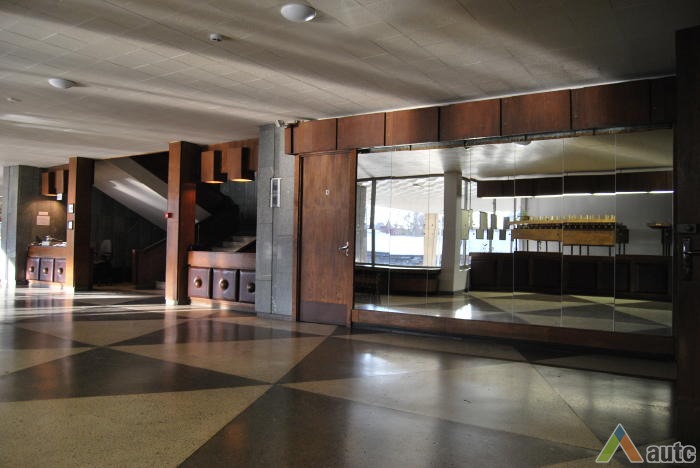 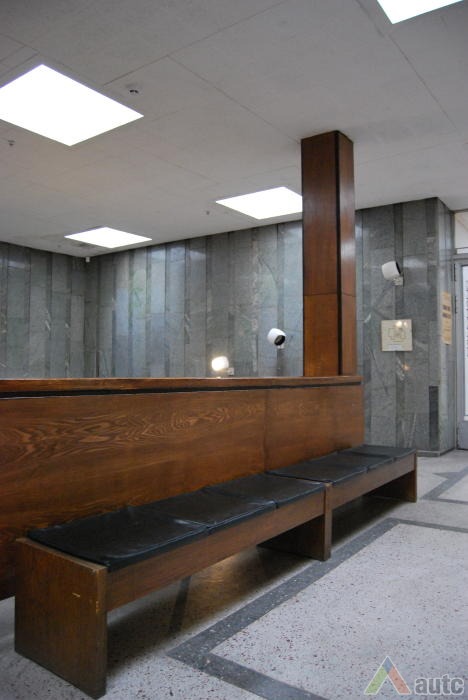 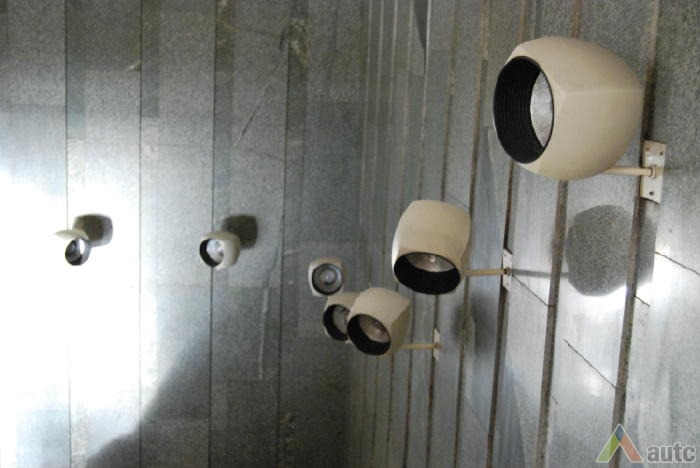 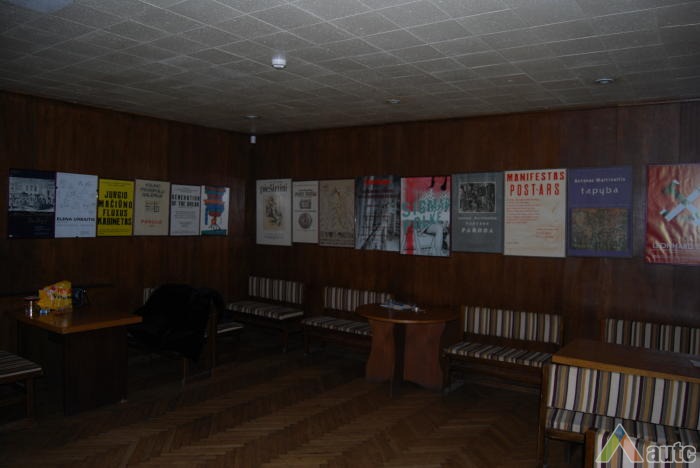 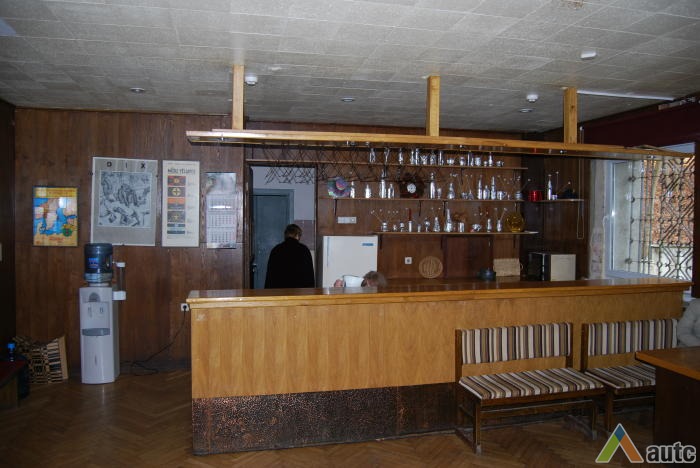 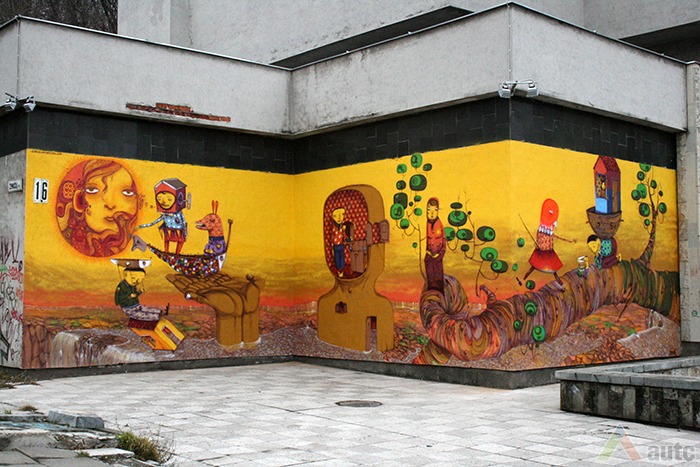