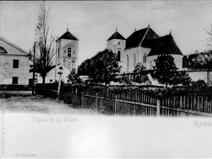 The Third Order of St. Francis sisters’ community, nurtured by the Bernardine Order, settled in Kaunas in the second half of the 16th century. In 1617 Kaunas County Marshal Aleksandras Masalskis, along with his wife, became benefactors of the Bernardine convent. In 1624-1634 the stone Holy Trinity church and two-floor convent were constructed. Circa 20 nuns lived in the convent, mostly daughters of rich noblemen. The Bernardine convent was closed down in 1864 ‒ the seminary of Samogitia bishopric had been housed in this building. In 1929, after the design by the engineer and architect Waclaw Michniewicz (Vaclovas Michnevičius), two more floors were added to the western wing of the convent. In 1938-1948 the complex was owned by Salesians. In 1963 the church was closed, but later reopened and in 1978 was given to the seminary. 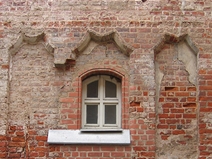